An End and a Beginning

Many of you will already know about the end of Unit Forward a few days ago. I can’t say I blame Alex for this decision and it reminded me that my own site here has just about run it’s course. So as of this post I will no longer be updating Blood, Dust and Dice. The site will remain here for anyone who happens to stumble upon it; I hope you find something useful or enjoyable.

I’ve made this decision for two reasons.

And so I announce my new blog The World of Father Long-Legs. It will primarily be a video blog about whatever I feel like talking about. A lot of time will be spent on pipes and tobacco so if that’s not your thing I understand. I will still talk about Dust and gaming and painting from time to time along with a whole lot of other topics (I have no idea what I’m doing). So if that interests you, or you just want the site name explained, stop by and check it out.

To any Dust Warfare players who are weathering this storm (or perhaps drought would be a better analogy) you have my respect and my apologies. I’m not selling my Dust models and I’ll continue working on the ones that are still unfinished, I might even buy some more someday. So if you’re ever in the Northeast Ohio area…

My Dust Warfare cards have finally arrived. Miniature Market (the site from which I pre-ordered) has great prices but they seem to be one of the last to get new releases. But since they are now in my possession I can review them, so let’s jump right in.

Front and back, or back and front

Each of the three factions have a deck which includes all the currently available units (soldiers, heroes, vehicles, aircraft and bunkers/strongpoints) as well a card listing the common orders issued during the Command Phase and cards for the damage charts for vehicles, aircraft and bunkers. There are also doubles (and some triples) of units that players are likely to field more than one of.  So, what do I think? END_OF_DOCUMENT_TOKEN_TO_BE_REPLACED

If you haven’t already heard, Dust’s newest expansion has gone up on Kickstarter for funding. My main reason for writing this is so no one else feels the panic I initially did when I saw this. You can read the official announcement here from Battlefront.

Yes it appears that next week Operation Babylon will be on Kickstarter. Does this mean that Battlefront isn’t releasing it unless it gets funded? Because that was my first, horrifying thought. But it seems that is not the case and that it is in fact an attempt to get things moving more quickly (something, I think, we can all appreciate).

Statement from Paolo Parente on the Dust Tactics and Warfare Facebook Group: “… this NDAK Army Deal would take 3 months to be released, and another three months the SSU Spetsnaz and then three more for the USMC… Being able to release them all at once is PARTY TIME !!! “ 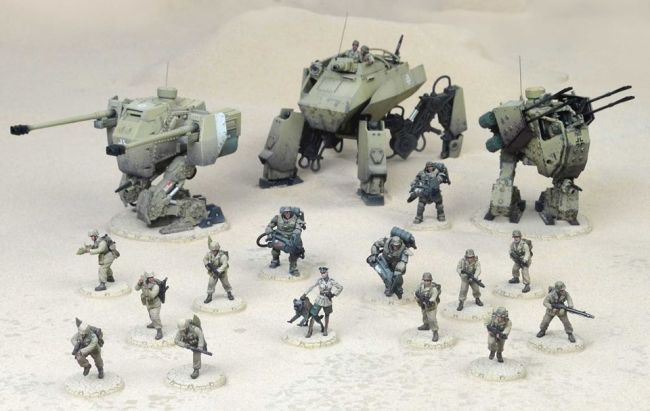 The NDAK Army in question

I for one, am happy about that decision. We Dust players have to wait painfully long periods of time for releases so it’s nice to see something being done about it. I would have liked if Battlefront had mentioned the reason behind it in their announcement post however.

I hope this prevented some heart attacks and rage quits. In other news my Dust Warfare cards finally shipped so expect a review sometime early next week. Thanks for reading and stop back soon.

Before we get to the painting I’d like to take a moment to congratulate fellow Dust blogger clash957 of Clash at Zverograd on reaching 5,000 views. If you haven’t checked out his blog yet you really should. It’s a great resource for learning about units and rules and is updated far more frequently than Blood, Dust and Dice ever will be. Congrats comrade, keep up the great work!

Today we’ll be painting some Axis Zombies, or Untertoten. The gaming world has become much like a zombie apocalypse in that it seems almost impossible to escape the undead no matter how fast you run or where you hide. So chances are you play at least one other game with zombies and you can use the same colors for all your zombie needs.

END_OF_DOCUMENT_TOKEN_TO_BE_REPLACED

I want to state right off the bat that I don’t know everything there is to know about the lore of the world of Dust. I haven’t read the comics or really anything other than the Warfare rule books. So if anyone has information on this topic that I don’t then feel free to share in the comments.

The Vrill are the mysterious race from which the Blutkreuz Korps initially reverse engineered the technology that led to the development of walking tanks, lasers and zombies. There are rumours – possibly confirmed now, I’m not sure – that the Vrill will become a playable faction in the game sometime in the future. At the current rate of Battlefront releases I’m guessing we should see them no later then the third quarter of 2035. Regardless of when or if that will ever happen there has been a lot of speculation about what the Vrill will look like. One thing I notice in most of these instances is people assuming they are aliens (they may have actually been referred to as aliens at some point in the fluff actually).  By alien I assume one means an extraterrestrial or extra-dimensional being; something not from this world. Seems obvious enough. But let’s look at the facts.

END_OF_DOCUMENT_TOKEN_TO_BE_REPLACED

Are you ready? - Criss Angel (The Mindfreak)

where observation and imagination meet nature in poetry

Letters from the Edge of Elfland

The joy of war

GODFATHER III is a decent flick.

Reviews and Opinions on all your Tobacco Pleasures

My great Wordpress blog
Tales from the Cards

A Lord of the Rings LCG Blog

Revisiting the Christian and State Relationship.

A blog for fans of J.R.R. Tolkien, from complete beginners to avid enthusiasts, exploring the author's imaginary world, influential writing and cinematic adaptations.

A few words on things to waste your time with

In 1947, the ultra modern Soviet city is besieged by both the Allied and Axis forces. This blog was primarly about the pulp/sci-fi alternate history World War II miniatures war game Dust Warfare designed by Andy Chambers and Mack Martin. It also covers other aspects of tabletop gaming I find interesting with a focus on minitures games.

Through it all, your spirit's alive

A Lord of the Rings LCG Blog

Scientific Investigations into the Cthulhu Mythos

We all travel the road into the hobby, may as well go with a bear

If you go down to the woods today